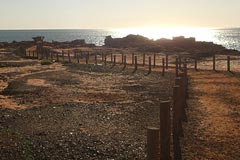 Gantheaume Point is at the southern end of Cable Beach, just out of Broome. Experience the vibrant colours of the fabulous looking, red sandstone cliffs that spill into the water and marvel at the views that stretch to the horizon.

Gantheaume Point was named by the French explorer Nicolas Baudin who passed the area in 1801. His investigation of the area was so cursory that he saw the pindan through his telescope, thought it was separated from the mainland, and named it Gantheaume Island. It wasn’t until Phillip Parker King passed along the coastline in August 1821 that Baudin’s error was corrected.

Gantheaume Point is home of the 130-million-year-old dinosaur footprints which can be seen at very low tides. Moulded casts of the footprints were created and placed at the point for easier viewing. Also at Gantheaume Point is Anastasia´s Pool. Carved out of the stone by a former lighthouse keeper to allow his arthritic wife the opportunity to bathe in the clear waters of the Indian Ocean. 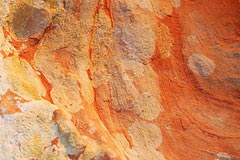 At Gantheaume Point nature is at its finest and for photographers it is absolute eye-candy. The sun spills across the red craggy cliffs altering the colours of the Broome peninsula before settling on the ocean for a spectacular sunset.

A walk around Gantheaume Point is wonderful experience, climbing the rocks and awaiting an unforgettable sunset.